In 1970 Tudor introduced their first Chronograph. The reference 7031. The design of the Chronograph itself is very similar to that of the Rolex counterpart. However there is a few differences. The cases are more "fat" and taller than the Rolex versions. The watches feature a manual wind movement and a two register chronograph function. What really make these watches unique is the very iconic 1970's dial design. This design has followed the next 2 variations of the Tudor Chronograph which is a prodcution model thru 1970-1980. 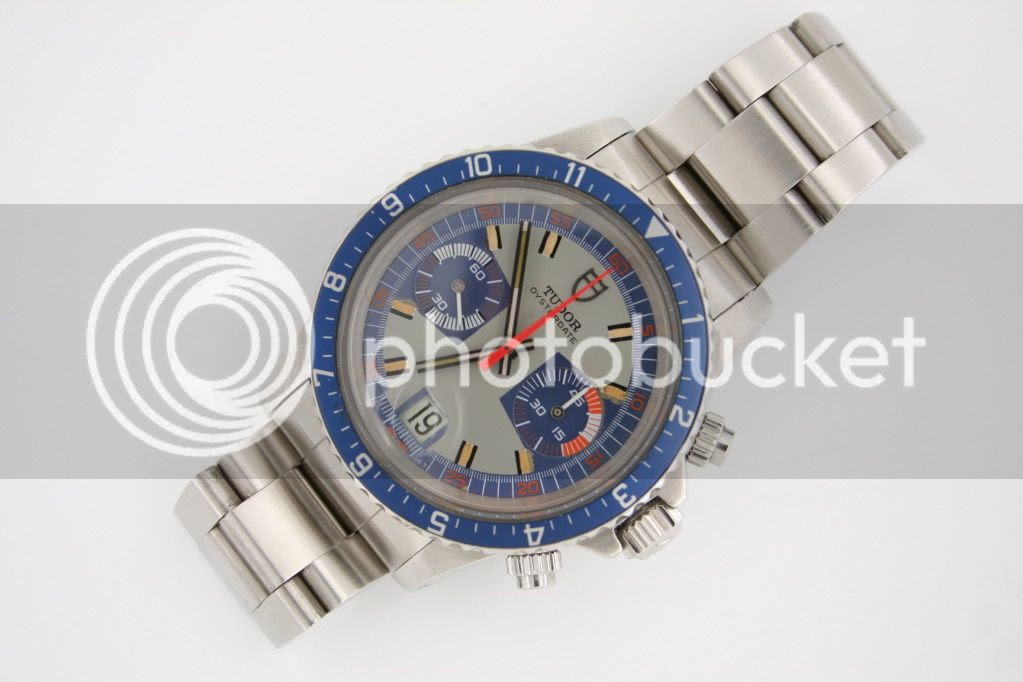 The first Chronographs are called "Homeplate" by collectors. This is due to the unique looking tritium markers. As far as we can see they were introduced in 1970. The last ones seen have serials corresponding to circa 1972. This is a very short production run - and very seldomly seen in Rolex production lines. 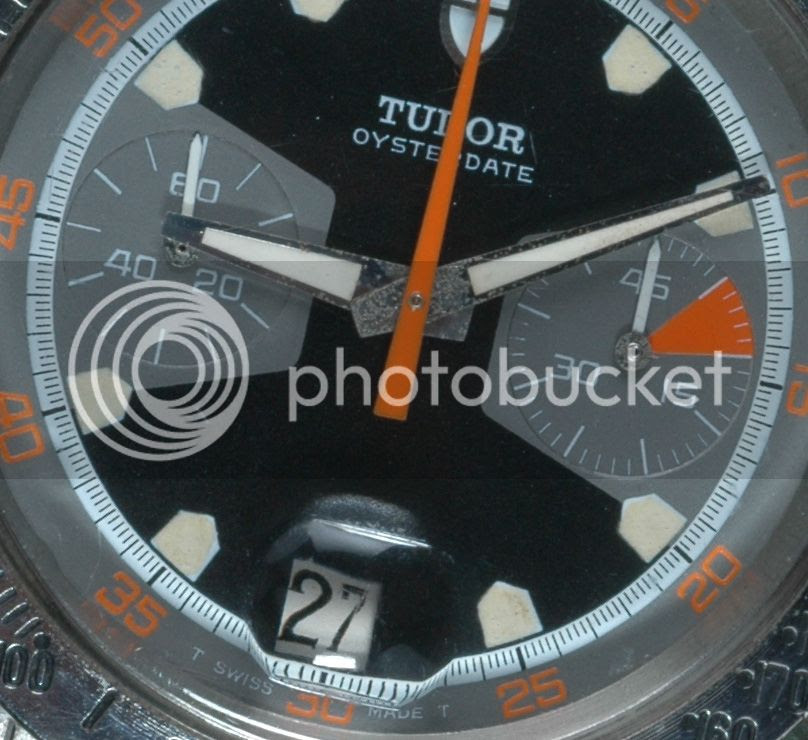 The above 7032 sports the '500 tachy dial - solid fitted bezel. The movement in the 7031/32 is a Valjoux 7734. Which is a manual wind movement. Note the date window at 6 is uniquely "turned" and is in fact a standard cyclope that is fitted turned half way compared to ordinary Rolex cyclopes. The Reference 128 crystal is only used on the 2 register models - 70xx and 71xx models. 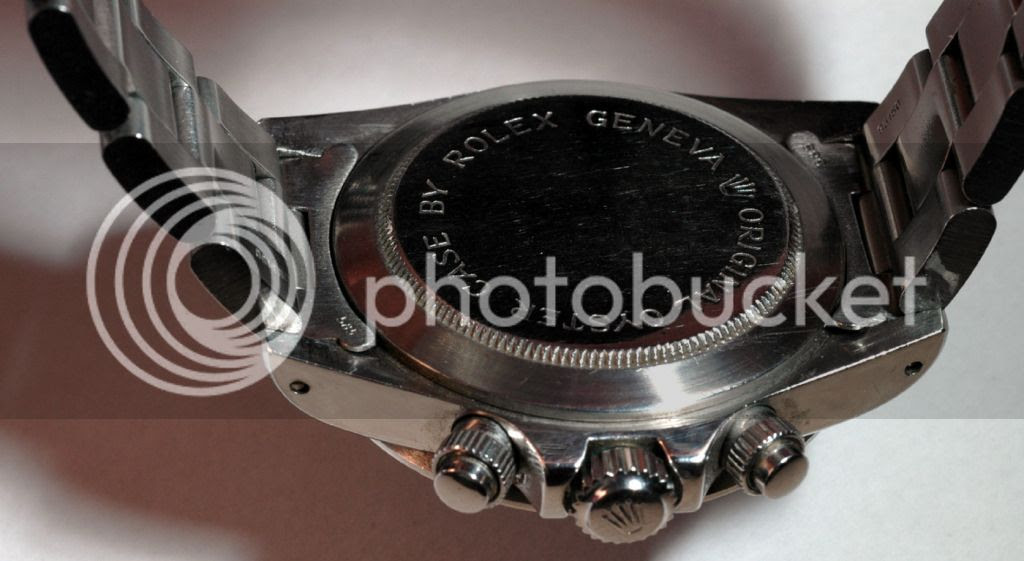 Bracelets on the Tudor Chronos is a sketchy area. Rolex in general has had the option of up or downgrading bracelets depending on what the customer wanted. However, in general - it is our experince that the 7031/32 were fitted on Rolex 7836 folded bracelets fitted with 380 endpieces. It is quite interesting that they chose the 380 endpieces on these as it is actually a quite poor fit. Later in the 1970s by the introduction of the Reference 9420 3 register chrono we begin seeing Ref 589 endpieces which are higher than the 380 - and that are flush fit to the case. Most collectors retrofit the 589 endpieces to also the older versions of 2 register chronos. All resources indicate that 589 endpieces were in fact never factory delivered on the 2 register chronos. 589 endpieces are no longer in production. 380 and 380b are sometimes seen in junk drawers at authorized dealers. Most dealer fit generic 501 endpieces at service. These are a poor fit. 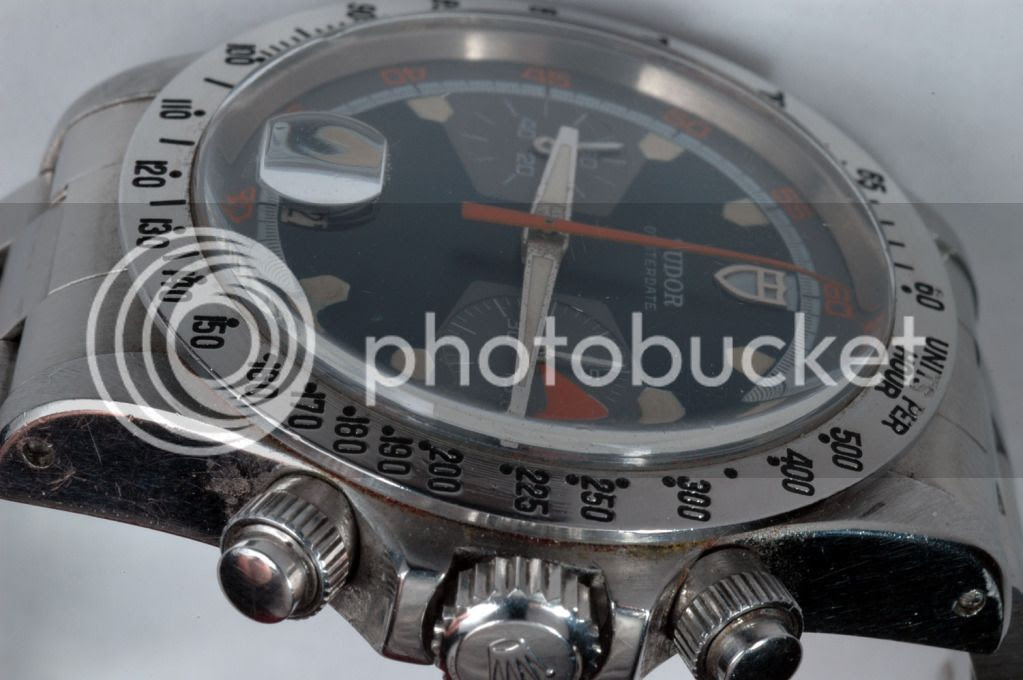 TUDOR 7032. Side. Note the bent chrono counter hand. Commonly done by old watchmakers to compensate for the crystal distortion. Photos by MarcusW

Inverted dial color combination also exists. Its hard to determine if the base grey or the base black is the rarest. it's a question of condition. In general fewer black dial 70xx are seen. However, most of they grey, have the classic spotting in the grey area. 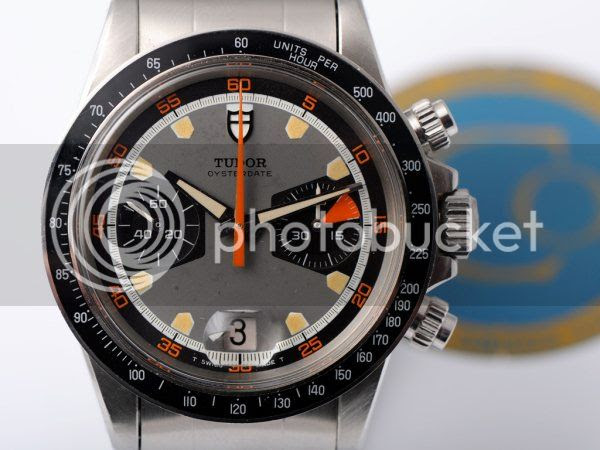 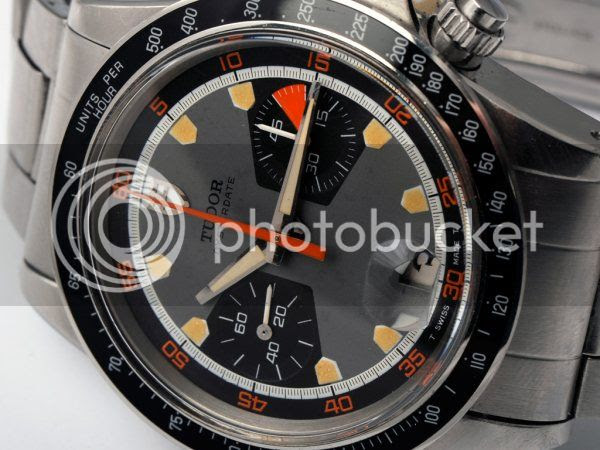 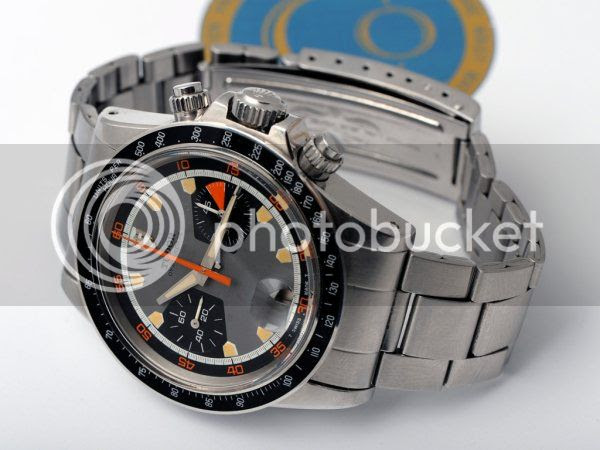 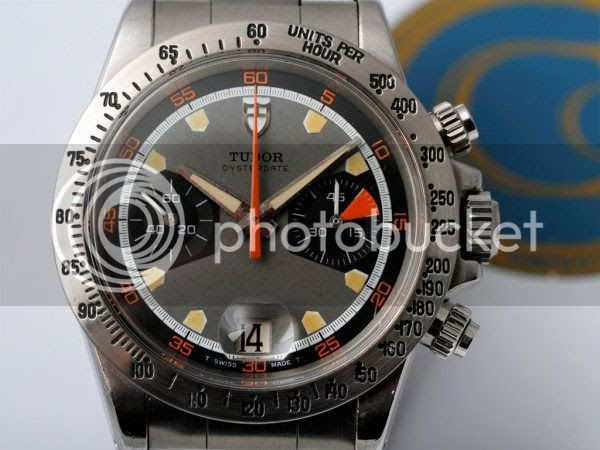 703x series feature a Valjoux manual wind 7734 (more technical details in our Technical Resources subsite). The watch is water proof to 5 bar / 50 meters. Unlike newer Rolex Daytonas the pushers may not be operated under water.

In 1972 Tudor altered the Chronograph line. It is unknown why the 7031/32 had such a short production run, however the 71xx series appeared approximatly two years after the old series started. The new version was also a 2 register chronograph. It came in three case variations. 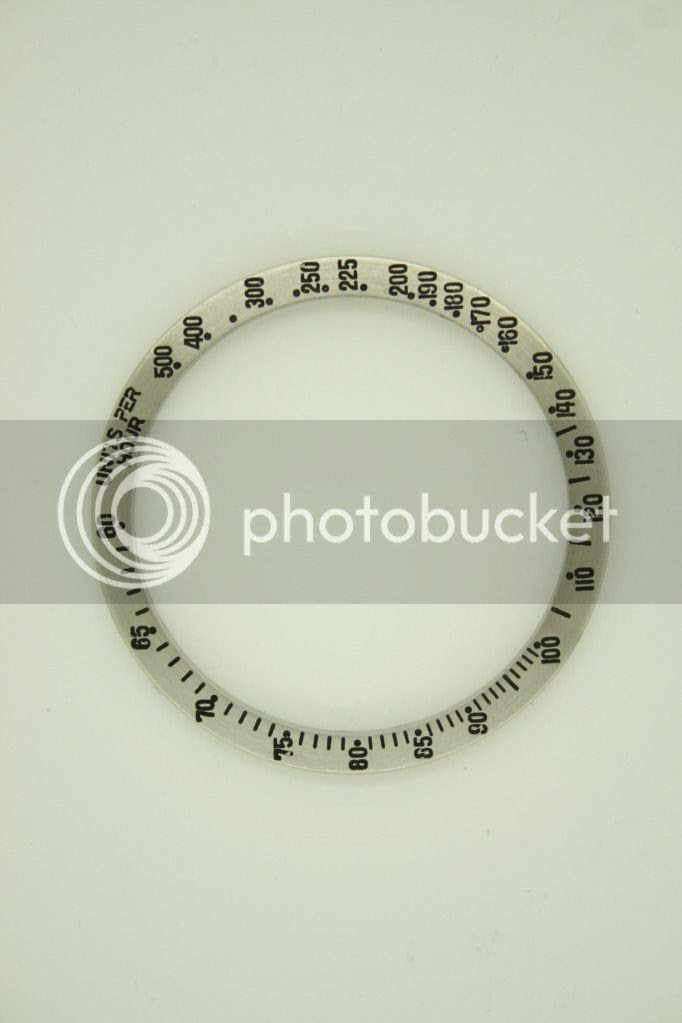 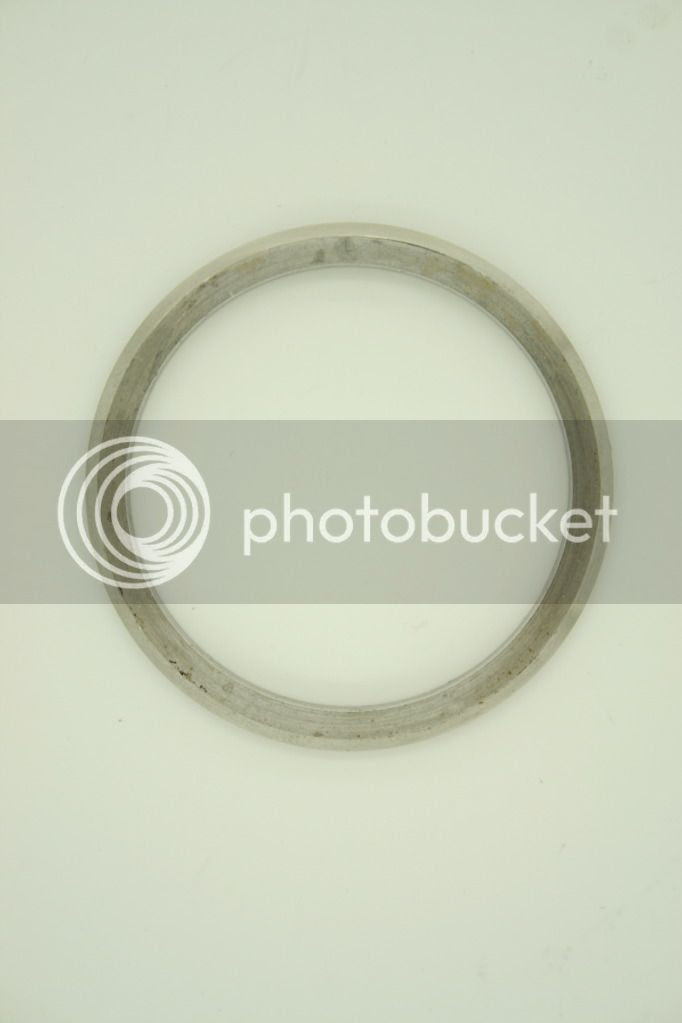 There is some confusion in the collectors community regd the reference numbers. In general Rolex ran four digit reference numbers untill the mid 1970's. Then introduced the fifth digit with a /. Eg. 7169/0. Shortly after again - approx late 1970's Tudor used 5 digit reference numbers without the /. During my research I have not found a structures system as to when these references were altered for the specific models. It seems to me that the different models had the changes applied over a period of time - perhaps as much as 5 years. (1970-75). This means that you can see /0 reference numbers in 1972-73 for the chronos - but for the Submariners they did not change untill 75-76. The 71xx series has been seen with and without the / designation. 5 digit numbers without / (f.ex. 71690) does not exist for the 71xx series. 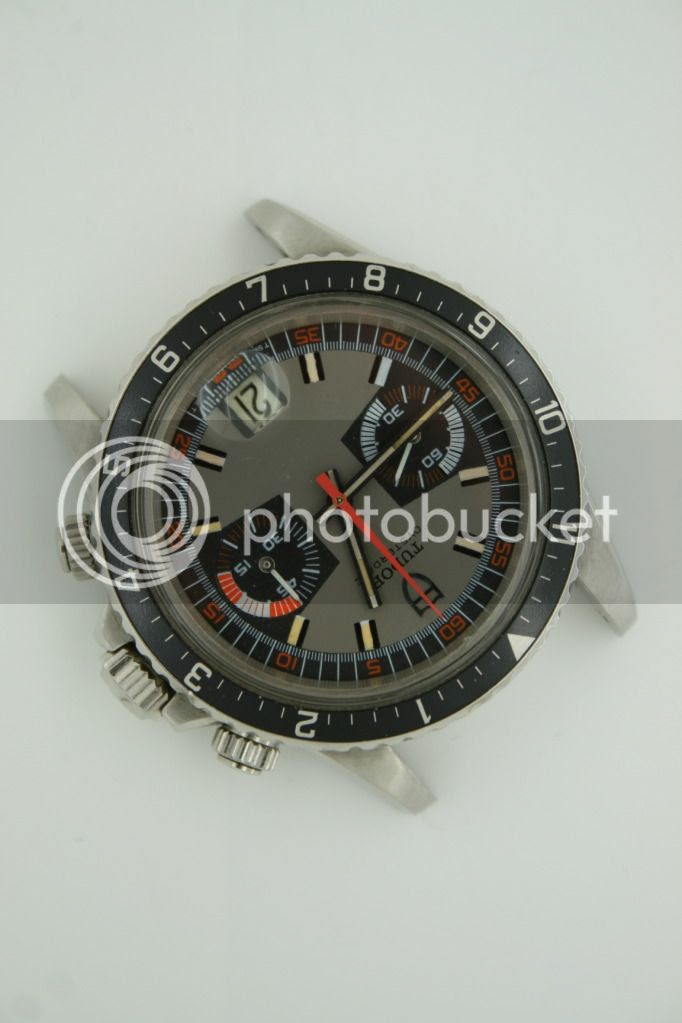 The blue 71xx series almost always see tritium marker decay close to the inner 10+20 markers and 40+50 markers. This decay hits the rim of the two chrono dials and in certain light you will almost certainly see paint decay.

The Grey / Orange 71xx series almost always has light gray spots on the large grey surface. The will look like small bubbles or spots of water. It is unknown why Tudor chronos decay in this manner but considering the massive paint problems seen on the Submariners - especially the 7021/16 and early 9401/9411 which are made in the same time frame as the chronos, it is logical to conclude that it is a general problem with tudors of this vintage. 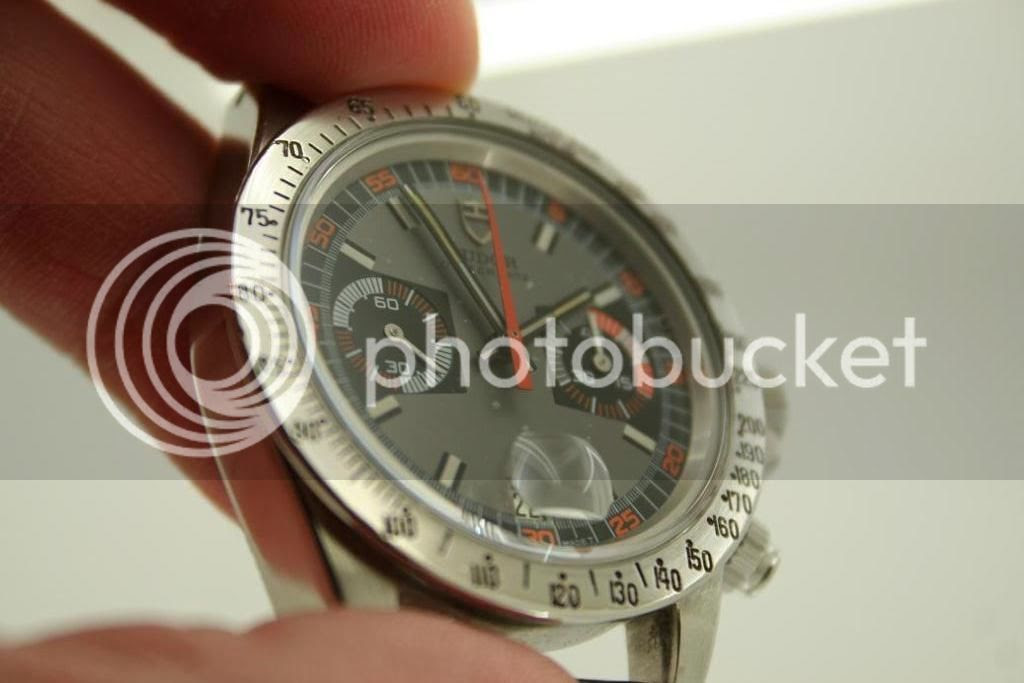 TUDOR 7159/0. Circa 1972. Note the spots on the dial and their conformity. Also note the original matté bezel.

A few examples showing no dial decay has been seen - this may be due to age or small variations on production quality.

The 71xx series all feature a manual wind Valjoux Cal. 234, 17 ruby movement. The watches are water proof till 50 meters. Similar to the 703x series they feature the Cyclope 128 plexi crystal. Technical details are listed in our technical section.

The 94xx series is the first automatic Tudor Chronograph. It features the Valjoux Cal. 7750 workhorse. A classic movement still in use today. When these were introduced in still a bit sketchy but the serial number project indicates that they were introduced around 1976.

This means were a looking at the following timeline:

Thirs third plexi glass Chronograph exists with two variations of Monte Carlo dials. The early version (approx 800.000 serial to 920.000 serial) is similar in design to the older two register models. It exists as black or blue.

From Watchcommander.com - Seen on their sales site. Ref 9420/0 Blue. rare 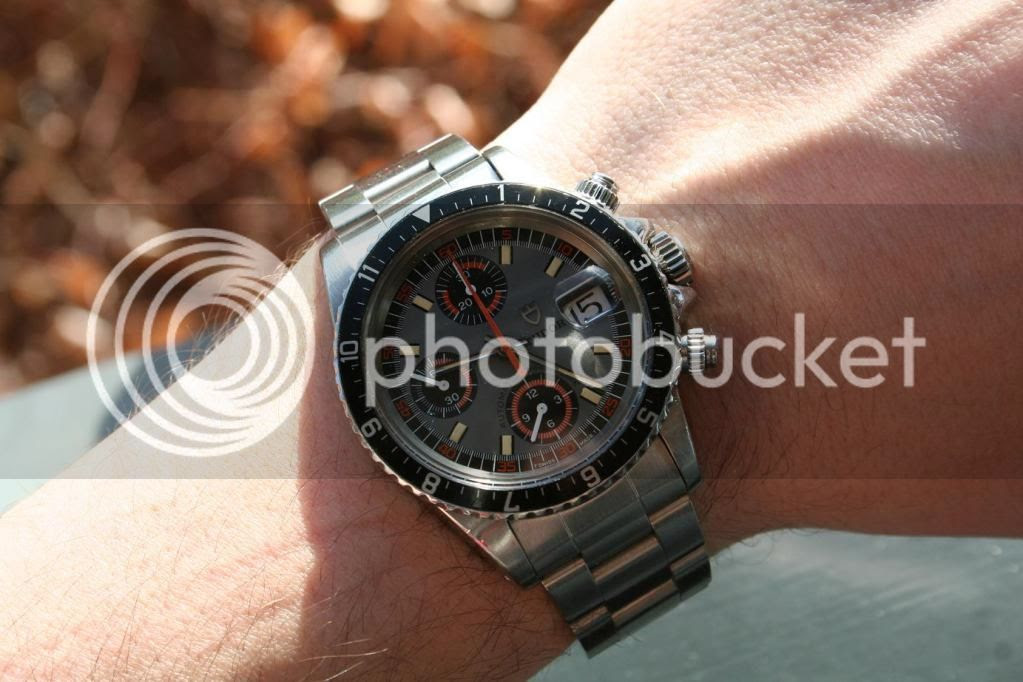 The last Monte Carlo variation is shown below. Its seen in general on watches with no / in the reference number. Over 900.000 serial. It is not quite as big a premium as the older variations. Still a very handsome dial. 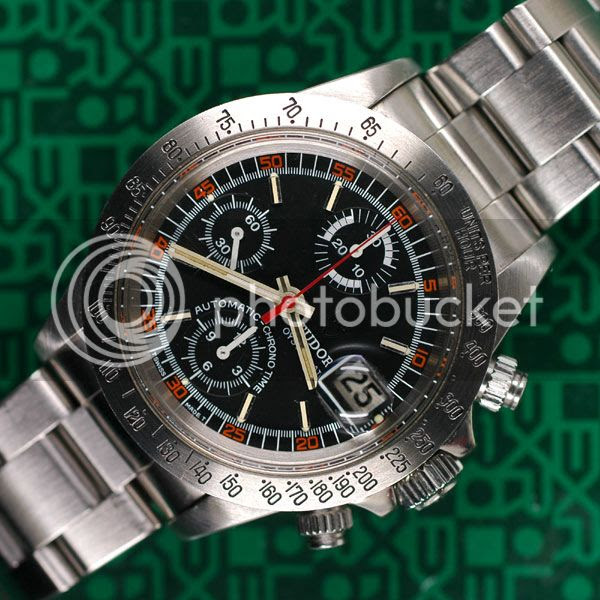 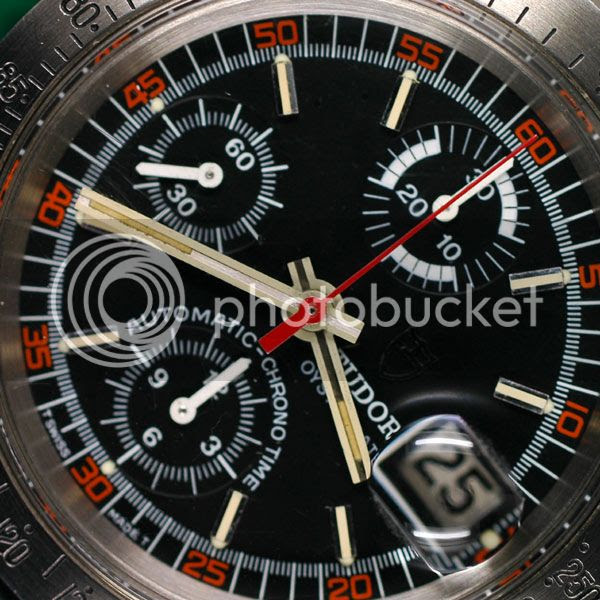 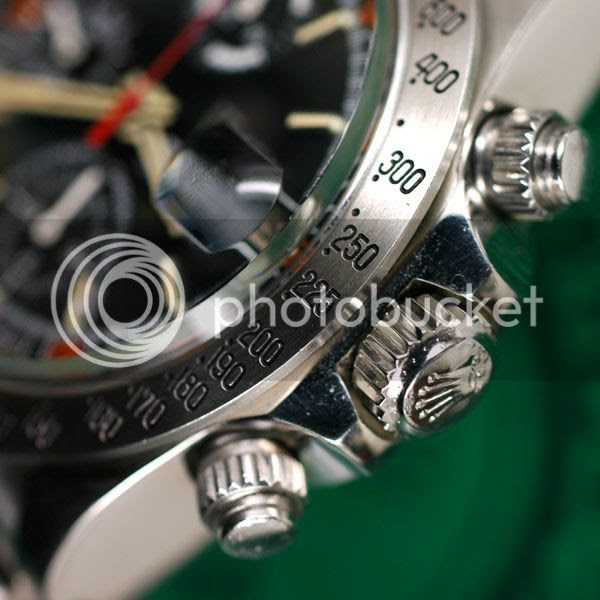 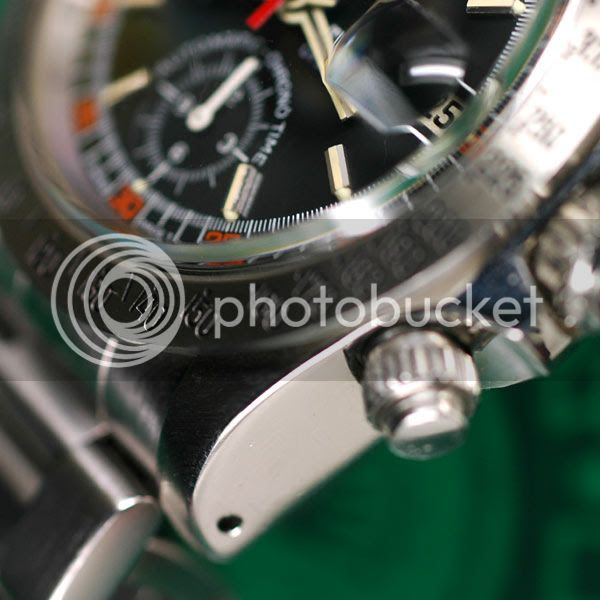 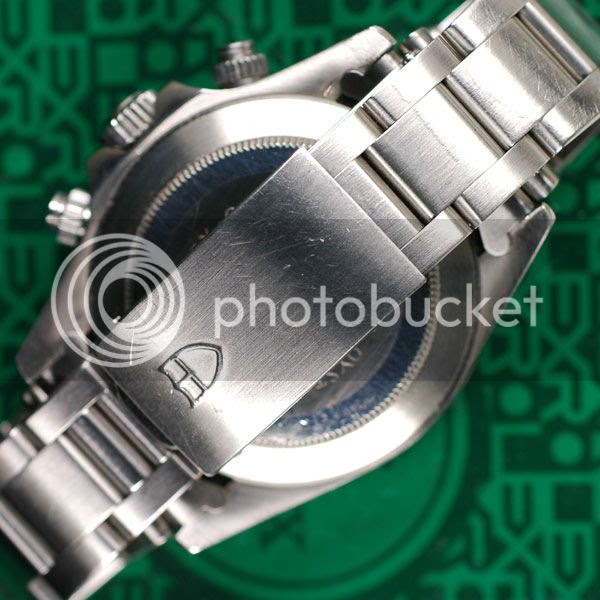